In 2017 Land Arts of the American West (LAAW) began a working relationship with Borderlands Restoration located in Patagonia, Arizona. Started in 2012, Borderlands Restoration Network (BRN) collaborates with communities located along the United States and Mexico border. With a goal of restoring functional physical landscape processes, BRN has developed a multi-pronged approach to preserving the natural biodiversity by emphasizing connections between water, people and plant-life in the region. BRN engages with public/private stakeholders such as property owners, land users, as well as communities on the Mexico side of the border. Restoration work involves outreach, education, erosion control and seed gathering and propagation within the region.


During a seven-day engagement, LAAW students were guided through sites and restoration efforts by BRN staff and volunteers. This site investigation culminated in a collaborative creative response to erosion on a dedicated wildlife preserve.


Investigation of the bioregion

Borderlands Restoration Network’s David Seibert and Perin McNelis talk with students about the threat to the diverse flora and fauna in the region due to human activity. 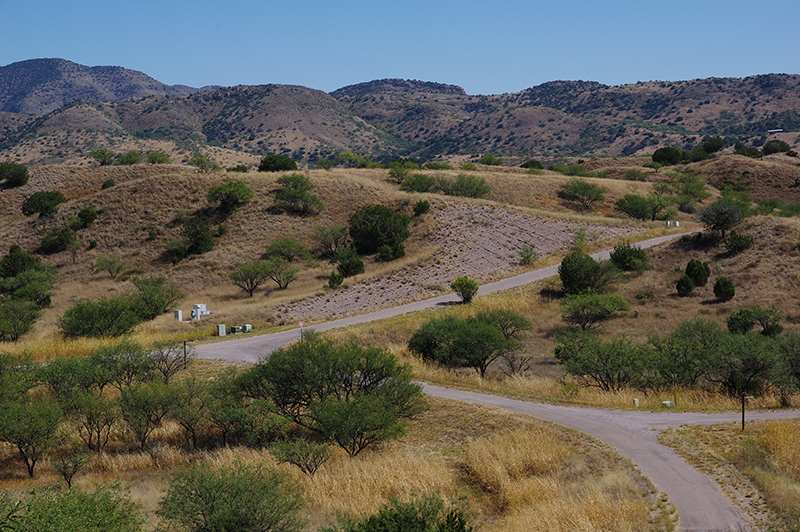 One of the test sites for the restoration network is a partially developed housing project within close proximity to the town of Patagonia. Experiments in bioremediation are being implemented to repair damage created by the initial stages of development. Numerous roads and graded parcels are subject to experiments in bioremediation to repair the disruption to the ecosystem.

“Rock Crew” team members Colin Treiber and Javi Mingura, explain different methods of erosion control to LAAW students. Some of these methods include: trincheras, media lunas, and one rock dams.

As part of our investigation of this work site, LAAW explored the impacts of the border on both human and non-human entities within the region. This map illustrates the various types of border walls implemented along the borderlands.


Local historian and resident, German Quiroga, guides LAAW students through the township of Lochiel, Arizona. This small, historical town resides directly on the border between the United States and New Mexico.

The border fence cuts a drastic line dividing communities in Nogales, Arizona. The wall not only affects human flow, but it also disrupts to the movement of wildlife.

Under the guidance of Borderland's Seed Lab Manager, Allegra Mount, LAAW students disperse into the field, collecting specific species of seeds which will later be utilized for restoration projects.

Allegra Mount explains the data sheets for seed collecting in the field. This information helps build a database of plant groupings, types, characteristics and locations.

Borderland's Native Plant Nursery Manager, Francesca Claverie guides students through one of the many native plant nurseries. These species of plants are often propagated from seed collected by Borderlands Restoration Network from local specimens.

Francesca guides students to a riverbed site where plant cuttings are collected.

Students innoculate and plant the cuttings gathered in the field.

These cuttings will be grown-out in the greenhouse and used for future restoration projects.

A primitive road created by the previous property developers was one area selected for erosion control. LAAW and the restoration crew from BRN created a collaborative project of restoring this land cut using various erosion control measures.

Students spent time observing and reflecting on the site, learning how the patterns of plants, soil and human/animal activity affected the landscape. They then developed a sculptural pattern of check dams to heal this degraded slope over time.

To prevent rapid water flow and subsequent erosion, rock and wood materials are placed in a manner which slows and disperses water, allowing for vegetation to re-establish on the barren soil. The established vegetation stabilizes the soil and prevents further erosion. 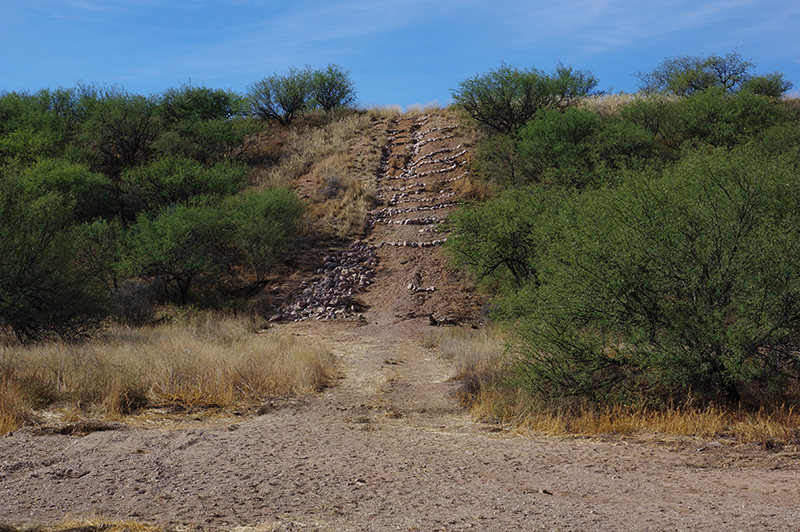